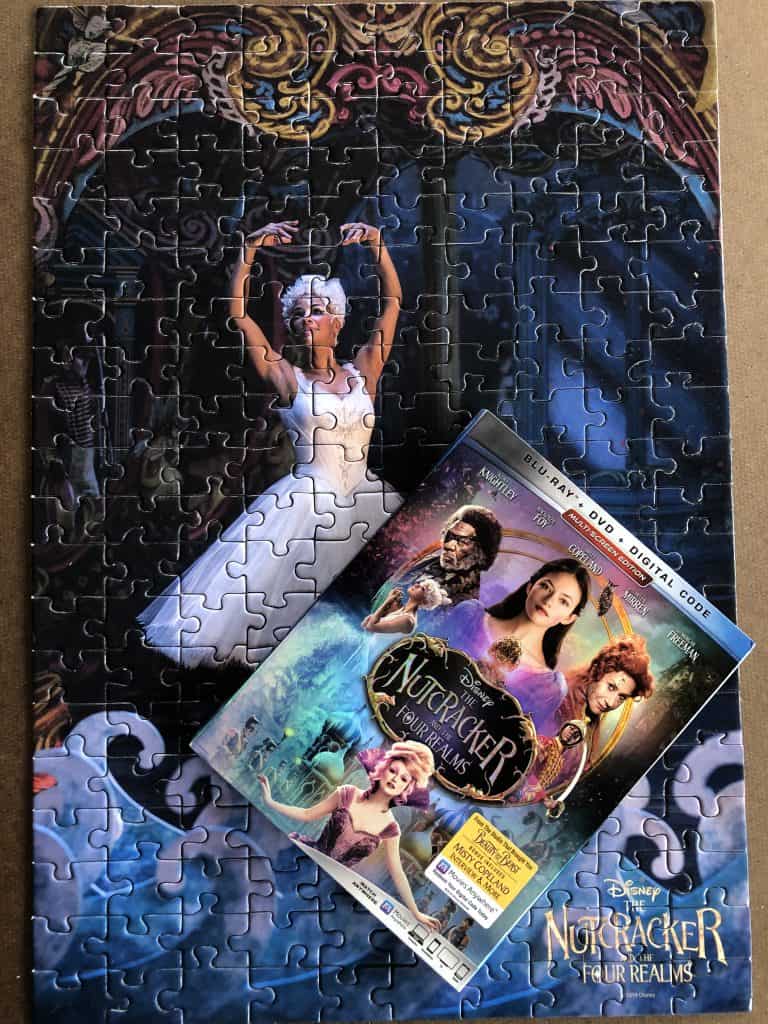 I shared with you last year my experience on the THE NUTCRACKER AND THE FOUR REALMS red carpet. This was such a neat experience. Having opportunities like these help me really look forward to when the movie comes out on Blu-ray so I can regularly share it with my family. Not only is today national puzzle day, but it is also the day that Disney the Nutcracker and the four realms is out on Blu-ray and digital release.

Here is my review of the movie as well as information on what you can find in the special features. 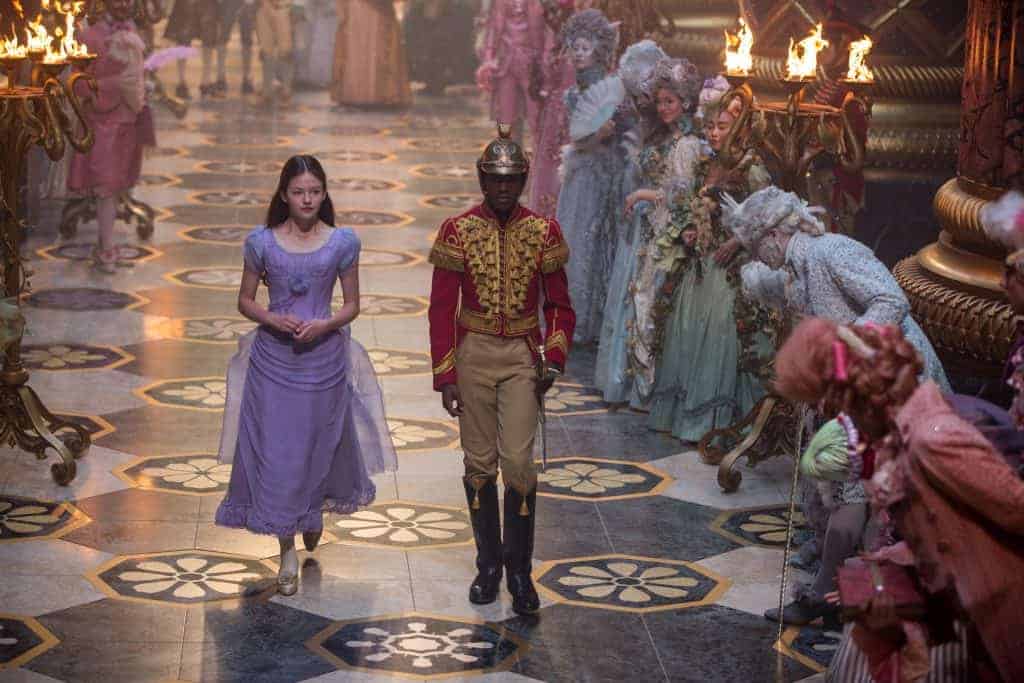 Mackenzie Foy is Clara and Jayden Fowara Knight is Phillip in Disney’s THE NUTCRACKER AND THE FOUR REALMS.

About THE NUTCRACKER AND THE FOUR REALMS

All Clara (Mackenzie Foy) wants is a key – a one-of-a-kind key that will unlock a box that holds a priceless gift. A golden thread, presented to her at godfather Drosselmeyer’s (Morgan Freeman) annual holiday party, leads her to the coveted key—which promptly disappears into a strange and mysterious parallel world. It’s there that Clara encounters a soldier named Phillip (Jayden Fowora-Knight), a gang of mice and the regents who preside over three Realms: Land of Snowflakes, Land of Flowers and Land of Sweets. Clara and Phillip must brave the ominous Fourth Realm, home to the tyrant Mother Ginger (Helen Mirren), to retrieve Clara’s key and hopefully return harmony to the unstable world. Starring Keira Knightley as the Sugar Plum Fairy, Disney’s new holiday feature film “The Nutcracker and the Four Realms” is directed by Lasse Hallström and Joe Johnston, and inspired by E.T.A. Hoffmann’s classic tale.

I think the most important thing to mention is that you are aware Disney’s THE NUTCRACKER AND THE FOUR REALMS is based on the Nutcracker book and not on the Nutcracker ballet. I know that many families have a tradition of watching the Nutcracker Ballet at Christmastime. This movie has similarities to the ballet but the many story is based on the book. Disney’s THE NUTCRACKER AND THE FOUR REALMS is 1 hour and 40 minutes long which is a perfect movie length for younger kids. Personally, I wished it would have been longer so they could have developed a few characters a little more. But of course if you have young kids, they will enjoy watching this movie. 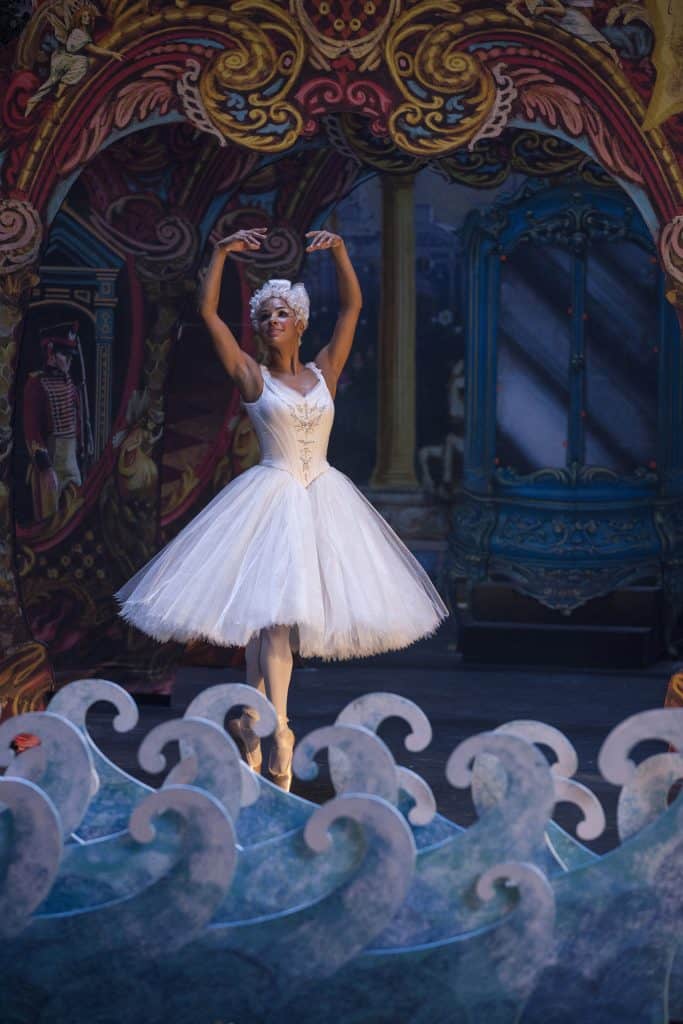 Misty Copeland is the Ballerina Princess in Disney’s THE NUTCRACKER AND THE FOUR REALMS.

Is there any dancing in Disney’s THE NUTCRACKER AND THE FOUR REALMS?

It was really important to the film makers that there was some ballet in the movie. There is a stunning scene with Misty Copeland sharing the story of the Four Realms through dance. She is an amazing dancer so it was fun seeing her performance in the movie. Besides that, the only other dancing is at the Christmas party where different characters are waltzing. 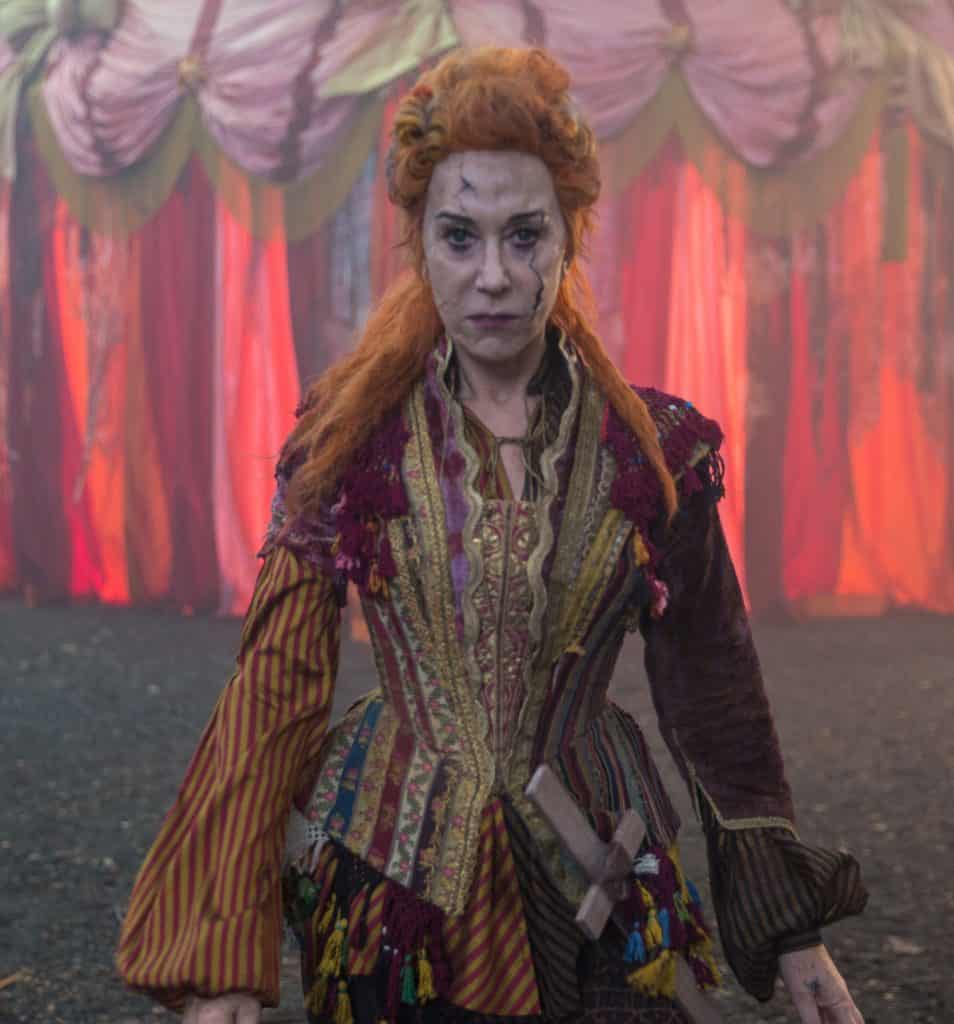 Helen Mirren is Mother Ginger in Disney’s THE NUTCRACKER AND THER FOUR REALMS.

Is Disney’s THE NUTCRACKER AND THE FOUR REALMS too scary for kids?

I don't think that kids will be scared during this movie. There is definitely a fantasy adventure aspects to this movie. There are soldiers fighting but they do a great job at making it family friendly. There is one scene that might be a little scary to younger kids and it is when the Mouse King first comes into the scene. The mouse king is made up of thousands of little mice. It is shown in the trailer, so if you have your kids watch the trailer I think they will do just fine. I have no concern with taking any of my kids to see this movie. 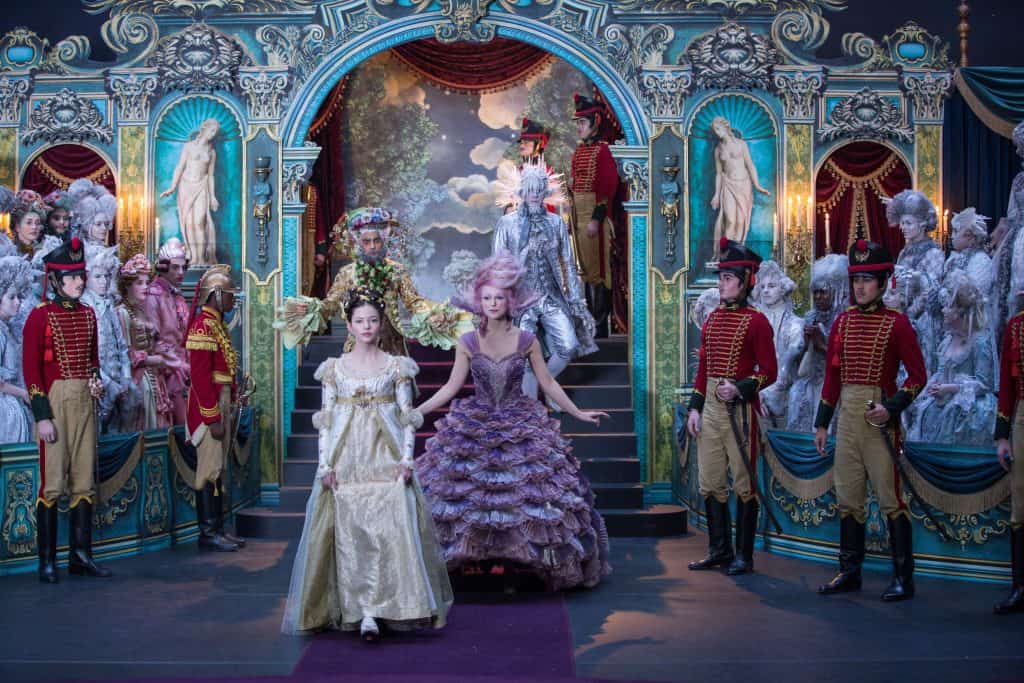 Disney's NUTCRACKER AND THE FOUR REALMS is a very magical, colorful movie. The set and costume designs are stunning. Sometimes I wish that I could watch the movie with a remote so I could pause and see each and every detail in a scene. Disney is very good at making a beautiful to watch movie. Disney's Nutcracker is a fun family friendly movie. It is a beautiful movie about love, family, sacrifice and helping others. It is set at Christmas time so it is perfect for the upcoming holiday season. Gather up your friends and family for Pizza movie night.

Disney The Nutcracker and the Four Realms bonus features

I always look forward to receiving The Blu-ray of my favorite movies because of the bonus features. These features take a great movie the next level when you have the opportunity to learn all the behind the scenes making of for the movies. It always amazes me to learn how much goes into the movie making process from start to finish. It truly is amazing. Here are some of the things that you can look forward to seeing in the bonus features:

Music videos: “Fall on Me” by Andrea Bocelli and featuring Matteo Bocelli

“The Nutcracker Suite” by Lang Lang

I love the music from the nutcracker. Especially “fall on me” by Andrea Bocelli.

Deleted Scenes: I love watching deleted scenes. This movie Has great ones that match the magic and beauty of the film. Although, I find that even though it tells a simple story that the creators always do a great job at taking out the seeds that they should take out.

Disney’s THE NUTCRACKER AND THE FOUR REALMS is on Blu-ray and Digital download NOW!