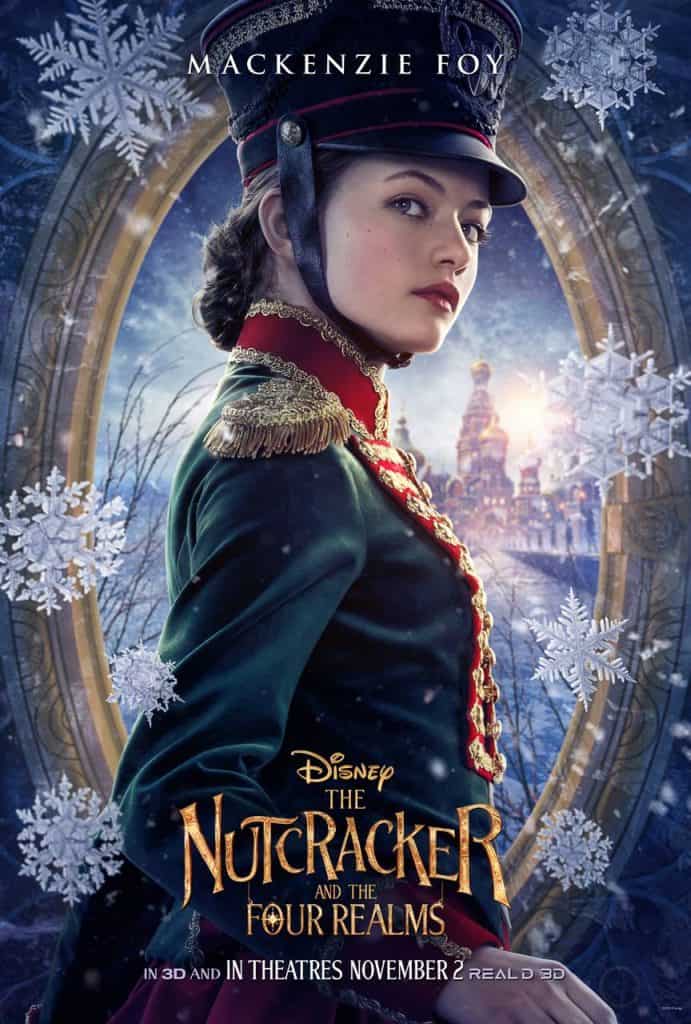 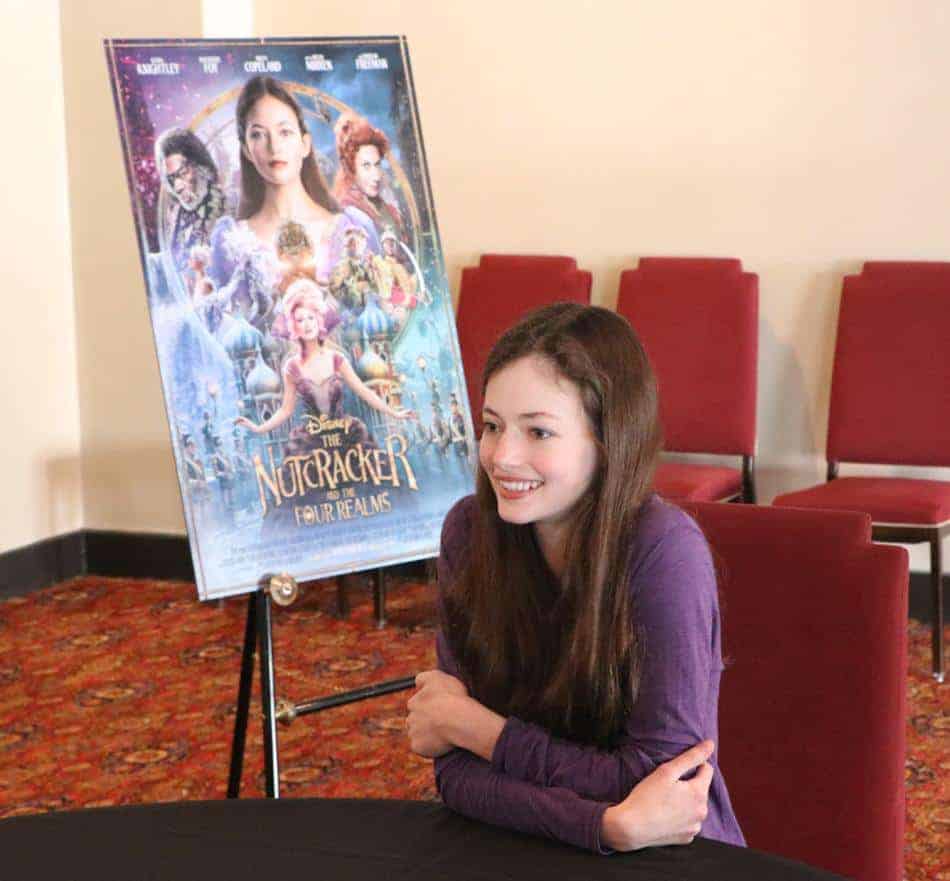 Mackenzie Foy was an absolute delight to interview. She was so very kind, her answers were very thoughts out and she loved sharing about her experience as the part of Clara. I was very impressed with her as a person. You could tell that she was kind to the core and that she was very articulate with her words. Here are some of the things that we learned about Mackenzie Foy during our interview.

Question: What is your favorite Disney Movie?

Mackenzie Foy: Cinderella is my favorite but I also like Atlantis.

Question: How does it feel to be a classical holiday character now?

Mackenzie Foy:  It’s really fun. What is beautiful about the Nutcracker is that it is such a beloved story throughout many years. It was really fun to be able to play a character that so many people all over the world can relate to and have a childhood connection to from seeing the ballet when they were young. I think that’s really important to be able to do. 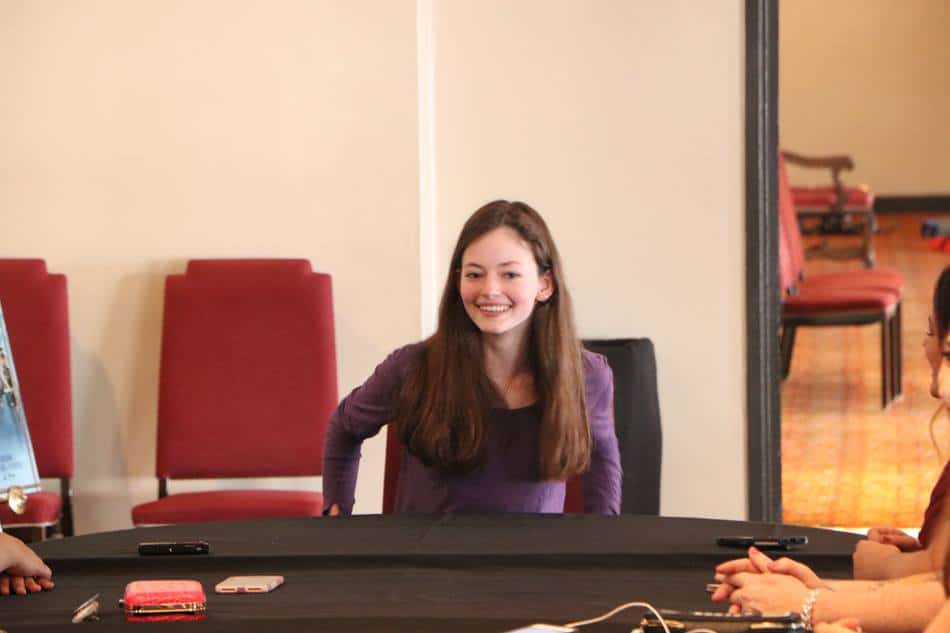 Question: Could you tell me what was your favorite costume to wear?

Mackenzie Foy: I wear quite a few costumes in the film which was really, really fun. They were all handmade- and very intricate, which is really amazing. I really love the purple party dress because that one has a bustle. It was very beautiful and there’s a lot of detail that went into the costume design. From the tights, to the shoes, to the many skirt layers, and the bodices, and the corset. I have a very high respect for all of the costumes, and also they have kind of a different character to them, and they kind of go with Clara’s evolution, which I really like.

Question: What was it like working with Morgan Freeman?

Mackenzie Foy: He is a really nice guy. He’s very joyous and has a very fun sense of humor, so it was really fun just getting to know him and getting to talk to him, and seeing what he was like.

Question: Can you tell us what a typical day would look like for shooting. 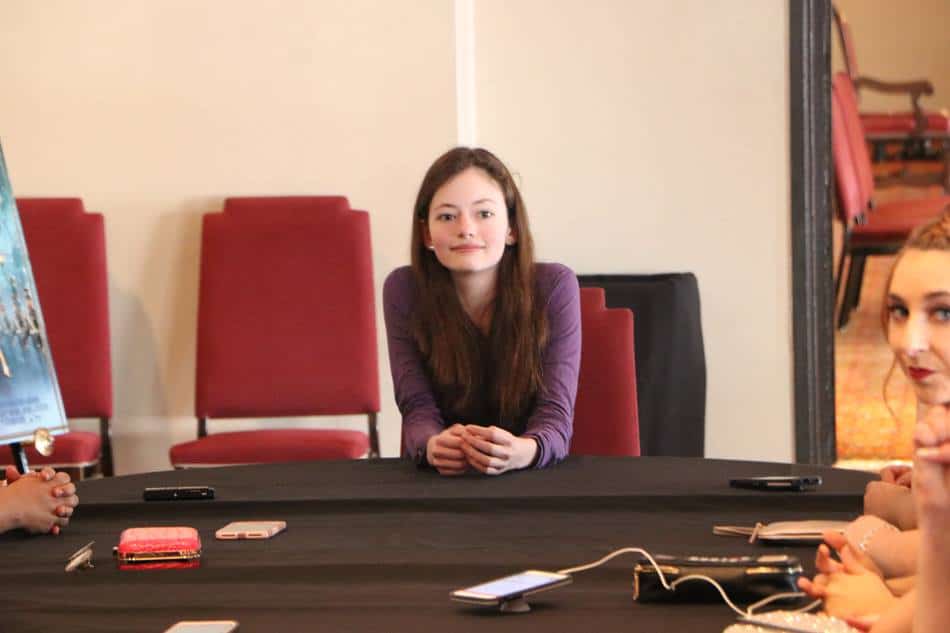 Mackenzie Foy: A typical day of filming involves putting on the costumes and you know, time on set or this film and about three to five hours of a school a day. The cast and crew was really, really nice, so it was a really fun  and happy environment. I still keep in contact with a lot of the crew. It was really amazing. There was a lot of young women in the crew, and so we all got along really well. We would talk about the shows that we watched on the weekend.

Question: Do you have any holiday traditions?

Mackenzie Foy: I love making cookies with my family on Christmas Eve.

Question: What is your favorite scene in the film and why?

Mackenzie Foy: When Misty Copeland performs. Her dance scene is really quite beautiful. The scenes in the film were real. The castle pops up, and the flowers open in the ground. Those were real. There was actually people making it all work. If you look in the background behind, all the extras are color-coded with an ombre effect and the set was like a canvas of night sky. They actually poked giant holes in the canvas and then shone lights behind it so it looked like stars. The sets in this film are very, very intricate, and that one was one of my favorites just because it was so beautiful. 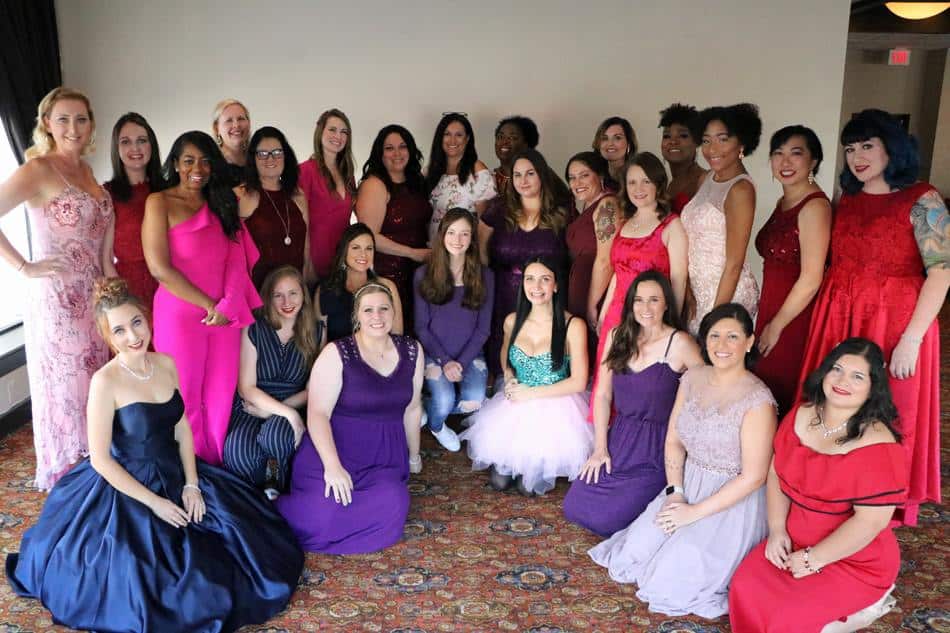 We had such a great time interviewing Mackenzie Foy. I think I have to agree with her that my favorite scene was when Misty Copeland dances. It was a very beautiful scene. When you watch the movie, you'll definitely have to watch the background to see how it all moves. THE NUTCRACKER AND THE FOUR REALMS is a lot of fun and perfect for the whole family. You can read my Nutcracker Review here if you are wondering what you can expect. Disneys THE NUTCRACKER AND THE FOUR REALMS is in theaters now!