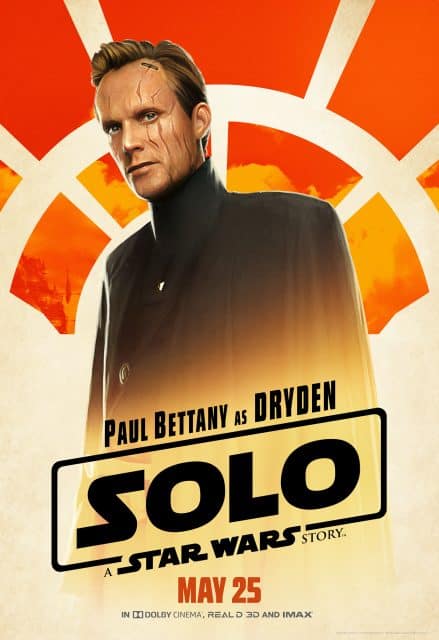 We are just days away from Solo: A Star Wars Story coming to theaters. I am so excited and already have tickets for the first showing Friday morning. My kids were jealous that I already watched the movie and made me promise that they could see Solo: A Star Wars Story as soon as possible. I absolutely loved our Solo: A Star Wars Story Paul Bettany Interview. He was so down to earth, humble and kind. A true gentleman. He is an actor that I have always enjoyed in movies so it was fun talking to him about the Solo movie and his experiences in making it.

Paul Bettany plays the role of Dryden Vos who is a villain in Solo: A Star Wars Story. His Character Dryden Vos "heads up an emerging criminal syndicate. Under Vos’ leadership, the organization quickly gains a reputation for ruthlessness. But as ruthless as Vos is, he is not a crude cutthroat, preferring instead to surround himself with luxury."

ABOUT Solo: A Star Wars Story 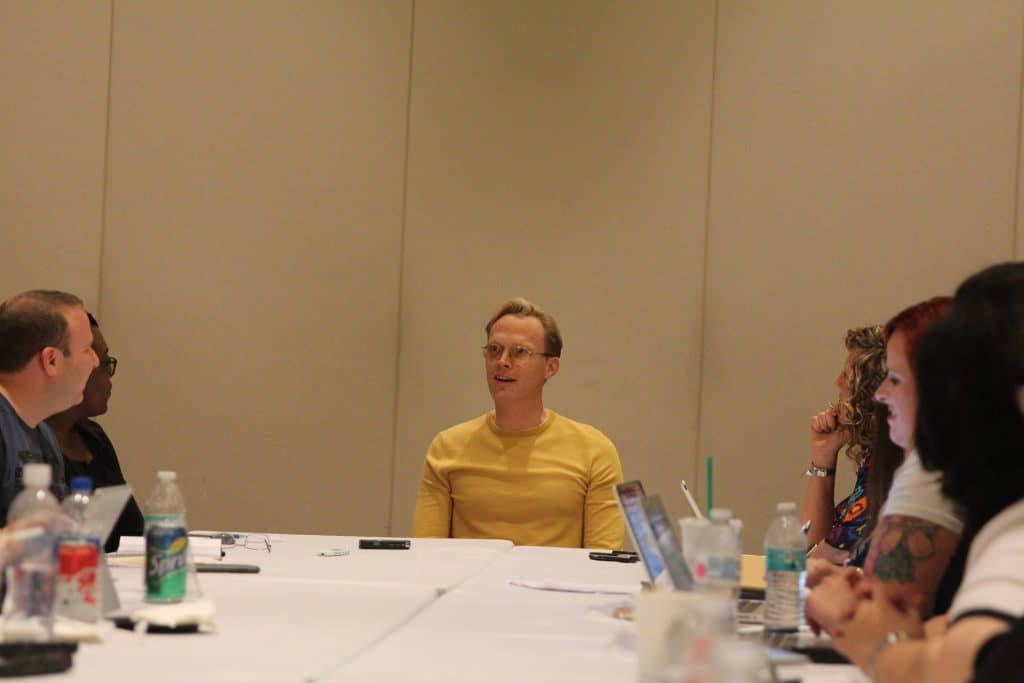 Paul Bettany played the role of Dryden Vos. In many movies that you watch, the actors spend a lot of time in hair and make-up. We assumed that the character of Dryden Vos would have had a lot of time in make-up because of the scars on his face. Paul Bettany infomed us that he didn't have any makeup! The scars were 100% done in CG! It really is amazing what the visual effects team can do in making a movie.

He was really excited to have the opportunity to play a Villain and it was important to him to do something different. He loved that this character gave him the possibility to do something different. He describes Dryden as an entrepreneur, someone who knows who he is and as being gifted at hurting people. One of the funniest quotes of Paul Bettany was when he was talking about playing the role of Dryden:

"He's really gifted at torture and murder, and he's OK with it. Ad that was really fun to play."

One of Paul Bettany's favorite things about being in Solo: A Star Wars Story was seeing Director Ron Howard have success. He said that Ron Howard has " put his hand out and helped me up so many times." In describing Ron Howard, he says that Ron is Genuine, Confident, Open, Collaborative and a very strong leader. You really could tell that their relationship was important to Paul Bettany and he was grateful for Ron Howard and their longtime friendship. He explains that Ron Howard is " as close to family as you get in business".

Their longtime friendship is what led to Paul Bettany become a part of the Star Wars family. When he found out that Ron Howard was directing, he sent him a text that said, " Have you spent long wintery evenings wondering why you aren't in a Star Wars movie like I have?" Two weeks later he was filming his first scene. Often when filming, he would elbow Ron Howard and say, "WE ARE MAKING A STAR WARS MOVIE!!!" 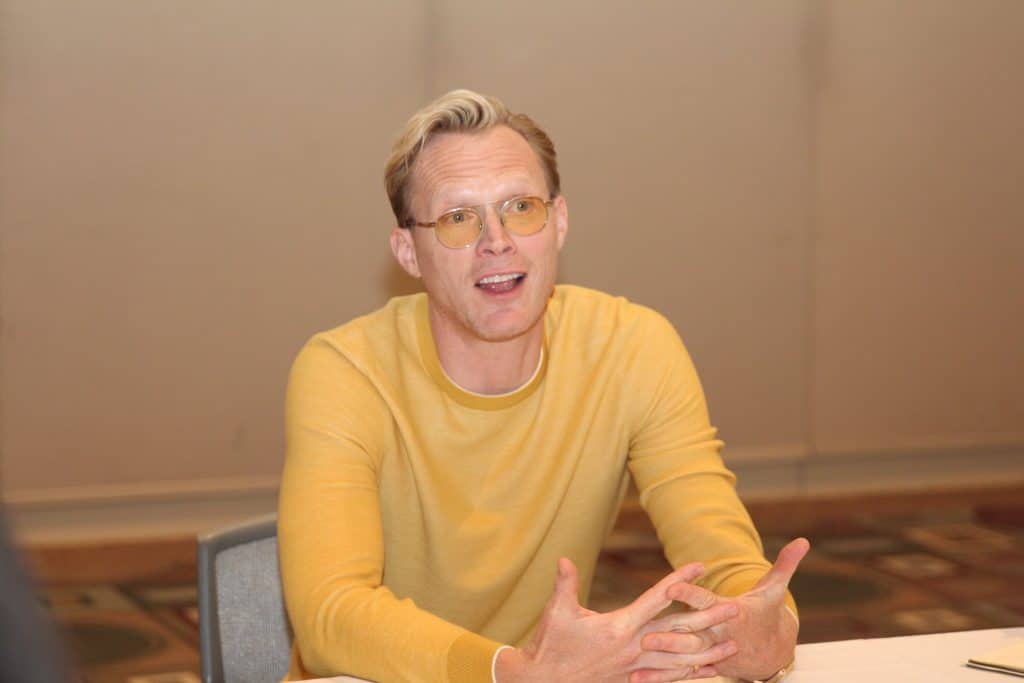 One of my favorite parts about our interview with Paul Bettany is that he shared often his gratitude for Ron Howard and he talked a lot about how proud he is of his family. Family was a huge theme that stood out in all of our interviews that the actors seemed to have their priorities straight with their family at the center of their life. One of his favorite things about being in a Star Wars movie was having the opportunity to bring his kids on set. They were especially excited to be on the Millenium Falcon.

Paul Bettany was grateful that his kids always say Please & Thank You and have learned how to be engaged with other people. He has limited their time on devices and really feels that his kids are excellent company and good people. Paul Bettany was an absolute delight to interview and a true gentleman. It was wonderful having the opportunity to talk with him and he was kind to take our group photo. 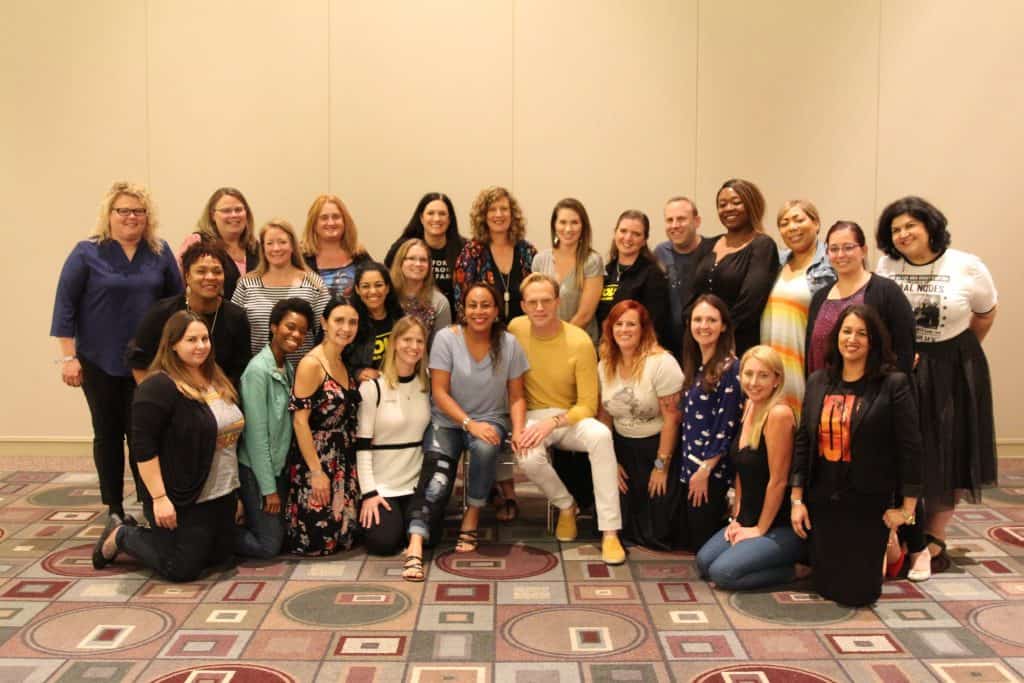 SOLO: A STAR WARS STORY opens in theatres everywhere on May 25th!