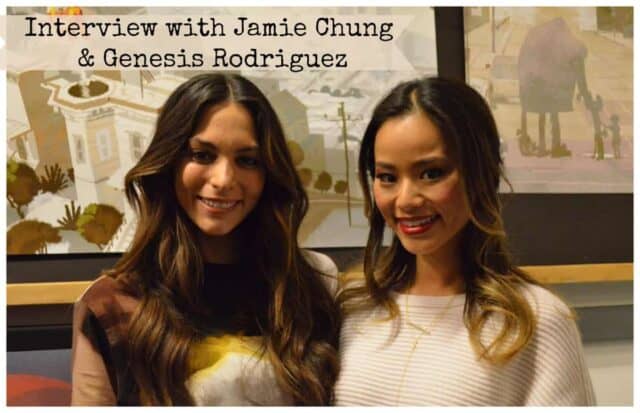 I wish that I could have had my daughter sitting next to me when we had the opportunity to interview with Jamie Chung & Genesis Rodriguez. She is only nine, but I would have loved to have her listen to these woman as they talked about their passion behind the film Big Hero 6. My daughter is going to be at the age soon where they have to really evaluate what is important to them. Is it more important to be cool or is it more important to be good. I loved listening to Genesis Rodriguez talking about what is really cool. I think this will make a great learning moment with my daughter since Honey Lemon was her favorite charachter in the movie. I can teach her about what Honey Lemon thinks is cool:

“I was into Robotics too and I’m an official Nerd. And to even have have a Movie that’s making girls want to be in Technology and be smart, I hope girls especially will be wanting that after this Movie. To be the first ones to raise their hands in class and realize that being smart is empowering. Robotics is cool. Science is cool.”

Robotics is a huge part of this movie, and where the story is really heartwarming, I think that many kids will look at this and think that using their mind really is cool. Boys and Girls. Both of my boys came out of watching this movie, wanting to study Robotics. 🙂 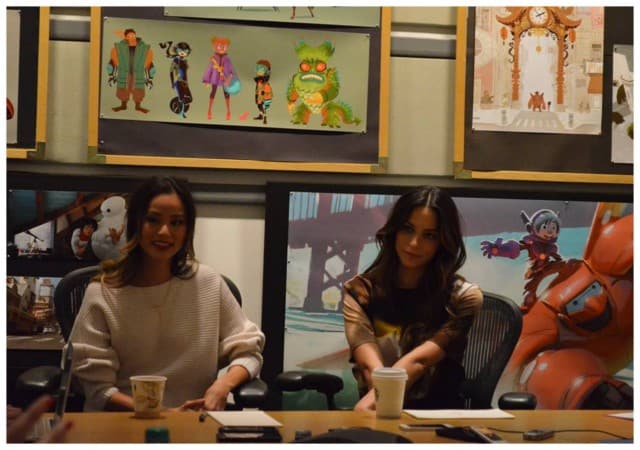 One thing that I really loved about this interview is that both girls seemed really excited and happy to talk with us. They answered all of our questions, joked around with us and even seemed sad when the interview was over. It really is fun to see the behind the scenes look at the actors and realize that they are normal people just like us! (Normal people with a really awesome job) It was interesting seeing the connection that they two girls had being in the film together. Where in voice acting, you spend most of your time alone in the recording studio, they both talked very highly of each other and you could tell they shared a special bond from the movie. Here are some of the interview questions that I really enjoyed:

Q. What was your favorite part about playing the Character that you played?

Jamie Chung:  Go Go doesn’t say a lot at the beginning of the film. But when she does say something, it’s very on point and it’s quite sassy. She’s described to me as the Female version of Clint Eastwood. And it was just fun to sass it up, and literally if I said a line with too much of a smile, the Directors Chris and Don would say, “do it,  a little bit meaner!”

Genesis Rodriguez:  And just for me, it was having to be so positive all the time. Um, I really feel like I was acting a Fool and I was getting paid for it.

Jamie Chung: We’ve been huge Disney fans all of our lives. We’ve been Princesses and I literally would comb my red hair in restaurants as Ariel. It’s like a dream come true to be able to play these strong Female Characters and bring that down to future Generations.

Q : Had you voiced an Animated Character before?

Jamie Chung: Nothing on this caliber. You know, once you’ve done a Disney Animation Film, it’s like kind of the top of the top, you know what I mean? You’re good. 🙂

Q : Did you like having a strong Female Character?

Jamie Chung: Absolutely, talking further on stereotypes, what I love about this film is that there is no stereotype. It kind of breaks all of those boundaries in terms of , being a Nerd, and being not cool. Like this is the absolute opposite of that. And in terms of strong female Characters, like Honey Lemon and Go Go are so different from each other and yet they both represent strength in their own way. And you know, what Disney’s great about, is not a Cookie Cutter example of what a strong woman. They both come in different shapes, sizes and different shades, and that’s what I love about this.

Genesis Rodriguez: I have do the motion and I think Jamie is the same way. Like you have to do the motion and get that sound out, and it’s so hard to do because you have to stay still. But it’s like if you’re falling 6 feet and you’re landing on the floor, like that noise, like that’s when you’re falling. It’s really hard to do. You have to use your imagination but it helps you. I couldn’t not move, not on action like moments.

Jamie Chung: There’s definitely lots of hand movement. Probably like 4 feet away from anything around me.

Q : What did you wear? Did you wear heavy shoes to get into these Characters? Did you do something like that?

Genesis Rodriguez: What’s weird is that I did, the audition exactly like Honey Lemon and I hadn’t seen the Character at all. I took a very bold Fashion Choice. I did Socks in Heels and an Undershirt and then a Dress over it. And I don’t do that at all. I don’t know why I went like that and then I saw Honey Lemon and the way she dressed and then this is freaky. I couldn’t have land it better.

Q : Did you add your own personality to the Characters?

Jamie Chung : I think the interesting thing when you add a voice to it. It really does come alive. And if you look at each Character and compare them to the person that’s playing them, they embody that Character. Like Genesis to me IS Honey Lemon, you know. Her own personal attributes are what kind of gives this Character life, and I think that’s what they did with casting. They wanted the characters to kind of represent the Actors that are playing them.

Q : Did you have time to play around with them?

Jamie Chung : Oh I wish. In terms of Adrenaline Junkie and being sassy and you know, I do feel like I embody those

Genesis Rodriguez : We met about a month ago.

Jamie Chung : At the first Cast Dinner when the film was done.

Genesis Rodriguez: Yeah, when it was finally done but I think Disney does such a good job at hiring, honest honorable people that have to portray these Characters that you know, they’re perfect at what they do, and they hire really special people. Everyone that was cast was just adorable and so much fun, and we immediately clicked.

Q : What’s your favorite scene in the movie with your character?

Genesis Rodriguez: She has the best line in the Movie.Which is “Woman Up.”

Q : Other than your Characters, who’s your favorite Character? And not Baymax?

Genesis Rodriguez: Fred is hysterical. What’s funny is that — T.J. is such a great Comedian. He’s like totally Fred too.

Jamie Chung : I liked Wasabi. I feel like a lot of resemblance with him. He was a Worry Wart and he cares about Safety and the Safety of everyone. 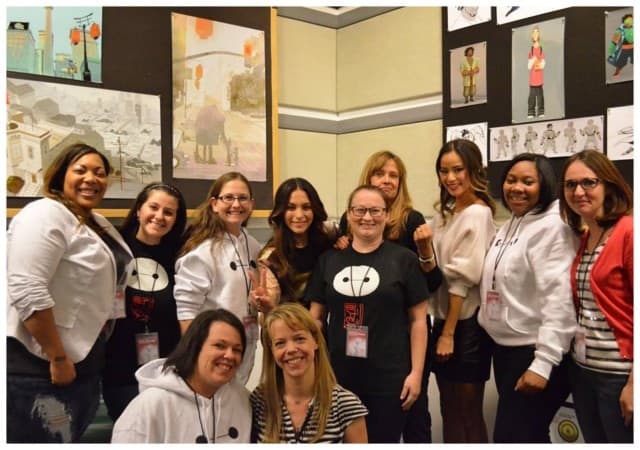 I really, really loved this interview. Both girls were very open and passionate about their characters. I love that they embodied in their own personal qualities the positive qualities of Go Go and Honey Lemon. I love seeing such strong female characters in movies that my daughters can respect and model their lives after, because science IS cool! 🙂  Almost as cool as Genesis Rodriguez’s nails….. 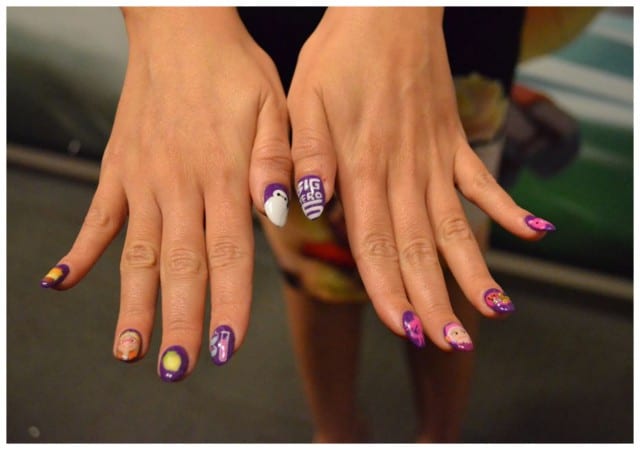 I received a trip to Los Angeles, from Disney, where I had the opportunity to interview with Jamie Chung & Genesis Rodriguez. All opinions are my own.