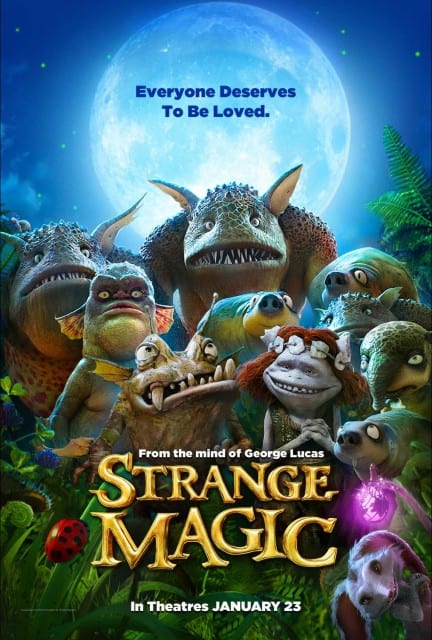 When I first got invited to California for the Strange Magic event my husband and I joked around about how maybe while I was at Skywalker Ranch, I would bump into George Lucas. When I was leaving for my trip, he told me to give George a hug for him. All as a joke. Because of course, we all know that no one meets George Lucas. That would be just TOO AMAZING. I wish you could have been with us on the tour bus when Marshall told us that we would be INTERVIEWING GEORGE LUCAS!!! There was a lot of screams and I instantly texted my husband who was VERY jealous! I interviewed George Lucas. I never thought those words would ever come out of my mouth! 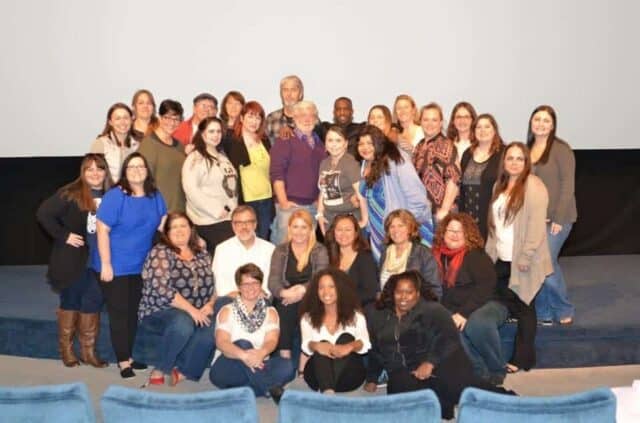 I know that everyone is familiar with Star Wars. It is very popular and my own family is a huge fan of the Star Wars franchise. This interview, though, was not about Skywalker Ranch or Star Wars. It was for his new movie that is coming into theaters on January 23rd. The new movie Strange Magic is such a fun movie. Have you heard about it? We had the opportunity to see his movie while we were at Skywalker Ranch. Want to know the neat part? George Lucas watched the movie with us. I watched George Lucas’s new movie with George Lucas at George Lucas’s theater. Woah. 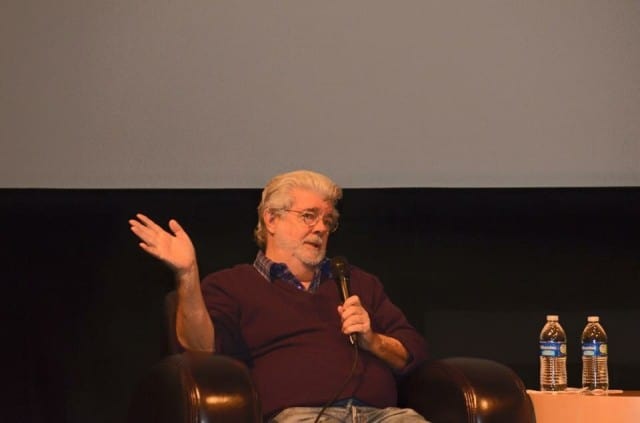 So on to the interview. George Lucas is kind, down to earth and obviously very passionate about the films he makes. You could see his love of his movies in the way that he talks about them. I was grateful that he was so willing to talk to us about his movie, life and family. Learning about the motivation behind his movies really helps me to truly appreciate the finished product.

Interview with George Lucas about his new movie Strange Magic

Question: Can you tell us a little bit about why you wanted to make this film?

GEORGE LUCAS: It started quite a while ago, about 15 years ago, and I just got the idea that it would be fun. I love to do musicals, so it kind of harkens back to my pre-Star Wars days. I thought it would be fun to make a film that was more for tween girls than Star Wars which is for tween boys. Even though in the end everybody loved it. I’m hoping that this one, even though it’s more teen girl-centric,hopefully it will engage boys and everybody will like it.

We started with a small group here, designing things and doing animation tests. It went on for years and years and years, you know I was kinda doing it on the side and it kept growing and it’s one of those fun movies. I loved doing it because I love the music, I love coming to work on it, and I love watching it. Which is the key in the end for me,  it’s something I did for the fun of it.

To me adolescence is a key period in a child’s life, and to make movies that say look, these are the issues, they may seem obvious to us because we’ve been through it, maybe your parents have told you about this, maybe they haven’t but you need to know the story of why you have friendships and what a friendship means. Why there are things in the world that are bigger than you are. Why you have complicated feelings with your parents and all these kinds of things are not unusual, they’re not just you, this is something that everybody goes through.

It’s a story that needs to be told every generation you know because the little girls and boys are growing up. They don’t know any of this stuff, by the time they reach 12 they’re very confused. And, even though we all know it, well it needs to continue to be told over and over again, you can’t let kids slip through the cracks and say, I was in the generation that didn’t get that message. The message is so simple and, you know it’s been around for thousands of years that it’s, you know it can always be retold. 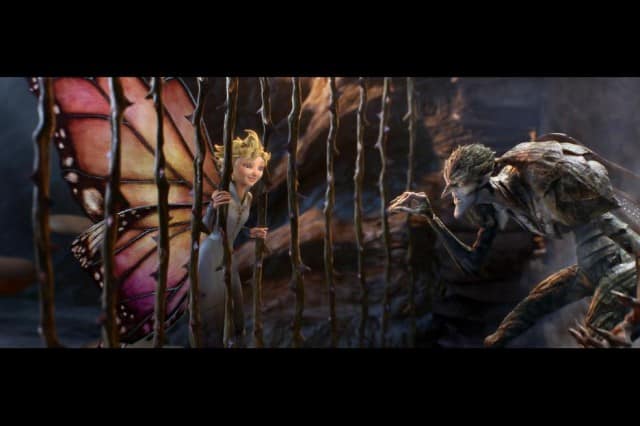 Question: Can you tell us a little bit about what attracts you to popular music as a filmmaker? And also after that I wanna ask how you got, how you decided to work with Marius DeVries on the movie.

GEORGE LUCAS: Well I love music. Music’s a huge part of my life, I love all kinds of music, and obviously I listen to music every day. But with this one, one of the inspirations was, I wonder if I could tell a love story using love songs, I could just take them and string them all together so they actually told the story. Which was the original challenge and in the beginning, the movie was about twice as long as it is now which means it had about twice as much music .

I said I wanted songs that had these words and so he came up with three or four songs and we go through them and say well that doesn’t really tell the story. This is a little off or this is, you know until we found the right one. That actual one, had the musical mood that would get us from point A to point B but also actually say the words that the actors were supposed to say to each other.That’s where Marius came in which is to say how are you gonna stitch all this stuff together when it goes, you know from one.

Different genres, different time period, different everything, but knit it all together so it sounds like it belongs in one thing. And he’s a genius at doing that, he did it and, you know long version we had a lot of faith in him, you know being able to pull it off, although, ultimately with all these guys I beat them to death, finally to the point where Gary came in and said well we have to make these decisions we can’t just keep all this music that George loves. You know we have to, we have to get this down to a reasonable length. 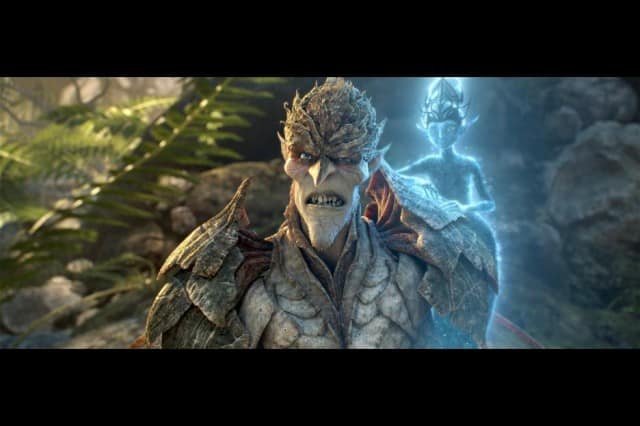 Question: So I read that that you originally had a bunch of Beatles’ songs for the movie, what were those songs and were you actually listening to those songs when you came up with the idea?

GEORGE LUCAS: Well things like you know, you could go to the Beatle catalogue and anything that’s got love in the title is something we had in there. All You Need Is Love, you know? But again it’s, you know there’s a real world. This is a relatively inexpensive movie, small, so, just like American Graffiti I couldn’t afford to put Elvis Presley in there. So I didn’t but I survived you know, it’s like everything else you have to kinda be strong, be brave and sometimes trim some of the things you really love.

They were all wonderful, they were all spectacular, and now what do we have, about 40 songs?

GEORGE LUCAS: Oh no wonder it was so painful. But they’re all great. You know we don’t go through long periods without music. It’s fun and again there’s the part where you actually have to tell a story so I think it melded correctly between the actual story and the dialogue and the characters and the music. They all feel like it belongs together, to me anyway. But I’m very, kind to my own movies. 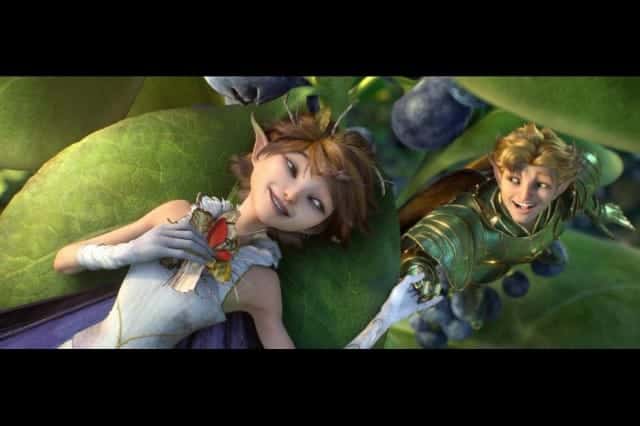 Question: Compared to the animation and visual effects that ILM used in Rango, how have those changed or improved at all since that movie, you know compared to what you see now in Strange Magic?

GEORGE LUCAS: They are different, you know every movie has a style. I mean animation, some people have made mistakes in animation by trying to say we want this to look realistic, which one, isn’t really possible and two, is not very bright. Because the whole idea of animation, the art of animation, is to create a style that is different from shooting a live action movie.

We can make copies of people, but they can’t be human. You need a human being behind them to be the voice, and that’s why, when we go and you put a camera on the actor, you wanna capture the magic of that actor. An animator can do it, and that’s part of the art of animation, but it helps an animator if he’s got something to work with.

And so, those two work as a team to create the character, and of course, like with digital technology, you’re just gonna create all the actors and eventually the actors will go ahead. It takes twice as many actors to do an animated film as it does to do a real one.

You know it’s not something that people do to save money or for whatever other reason, they do it because ultimately in this particular case you’re de-using a style, a particular style, and in this case I wanted the style to be very realistic, much more realistic. Rango is, you know an animated film, it’s got some, you know realistic looking stuff but this is a whole different level of realism.

And the idea was that you could go out in your backyard and these guys all live out there somewhere.

Moderator:  Right. They’re in the grass. 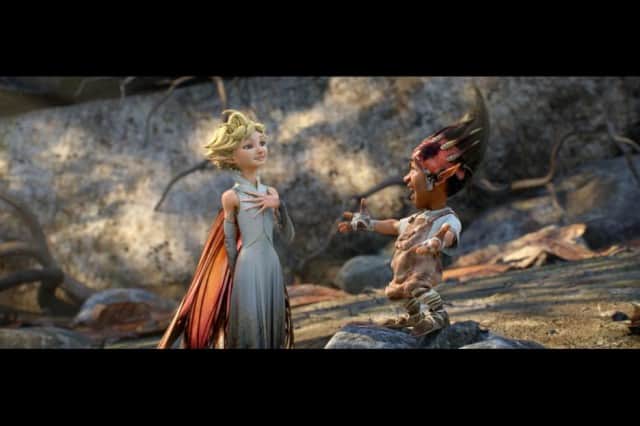 I loved having the opportunity to interview George Lucas. He was very real with his answers and made me laugh many times. One of my favorites is shown above when he was talking about the number of songs in the movie. He thought there were 40 and realized it was only 25. His reply, “no wonder it was so painful!” I can imagine as a film maker that it would be difficult taking out parts of a movie that you love. 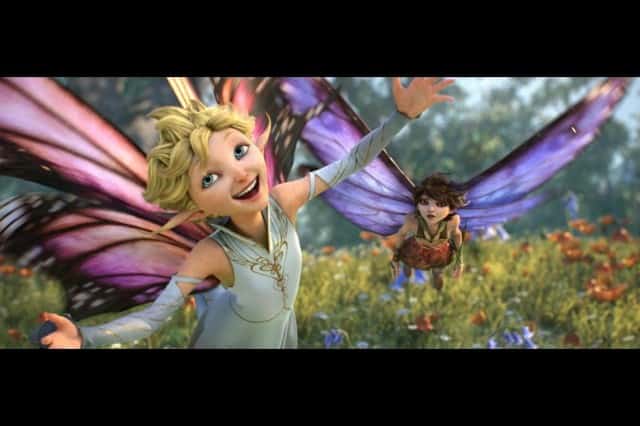 Make sure and take your family and friends to see Strange Magic in Theaters January 23rd!