Moana is such a stunning movie so I was excited to learn more about the behind the scenes making of this movie. I was blown away by the thought and heart that went into making this film. We had the opportunity to learn from Directors Ron Clements & John Musker, Producer Osnat Shurer, Costume Designer Neysa Bove and “Mini Maui” 2D Animation Supervisor Eric Goldberg. These are many of the industry greats and it was amazing to hear from them the process that went into making this film as well as their growth that came from making it. The Moana Bluray special features are packed full of amazing content where you can also learn more about the making of this movie. 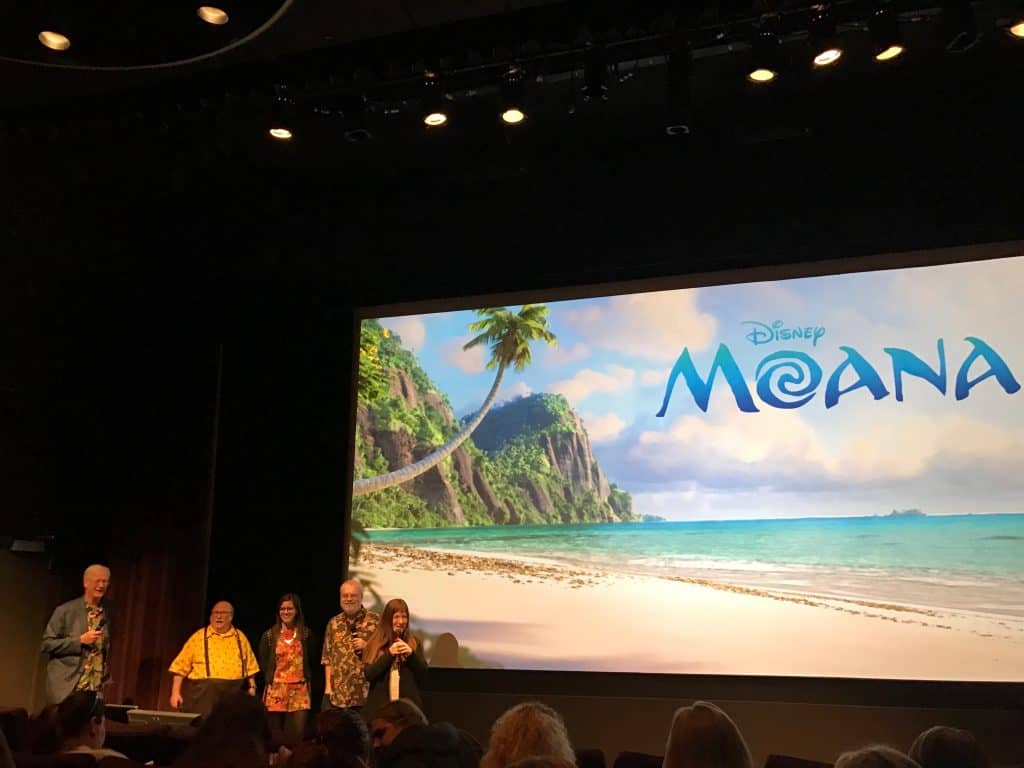 As part of our Moana presentation, we had the opportunity to have a question and answer session as well as watch different videos about different aspects of the film. It was neat being able to watch these features with the industry greats and hear their perspective on the making of the film. It really helped me appreciate the movie more hearing about the time and passion that went into making it. Here are some of my favorite things that I learned from this interview.

Ron Clements and John Musker pitched the idea of Moana to John Lasseter. He loved the idea both told them that they needed to do more research so they traveled to the Pacific Islands and took a deep dive into their cultures. They felt that this research trip was life changing.

They included the people of the Pacific Islands in the whole process of the movie because they wanted these people to have a movie that they could be proud of.

The original Moana story focused more on Maui as the main character but they later made the shift to Moana.

They found so much value in looking at the past. Looking at the Past is Everything. You need to learn to connect to nature in the past, present and future. In the culture of the islands, everyone is in it together and the island connects people. They wanted to capture that peoples ability to work with nature in being self sufficient.

In the scenes where Maui interacts with his tattoos, you are seeing a 2d tattoo on a CG body. 2D Animation Supervisor Eric Goldberg started at Disney working on the Genie and his work on Moana was incredible. He separated Maui's body into different sections and was able to make this 2D objects interact flawlessly on a CG body. This is new technology that is always getting better.

Research of the costume was difficult because they had nothing to reference with in making the designs. They would draw many different designs for the directors to choose from. Items like the necklace went through different stages and they loved the final one. They would create the different costumes so they could see how it looked and how it moved. It was important that Moana's costume was something that a girl would want to wear, but also be able to move in ways that she would need in the scenes. 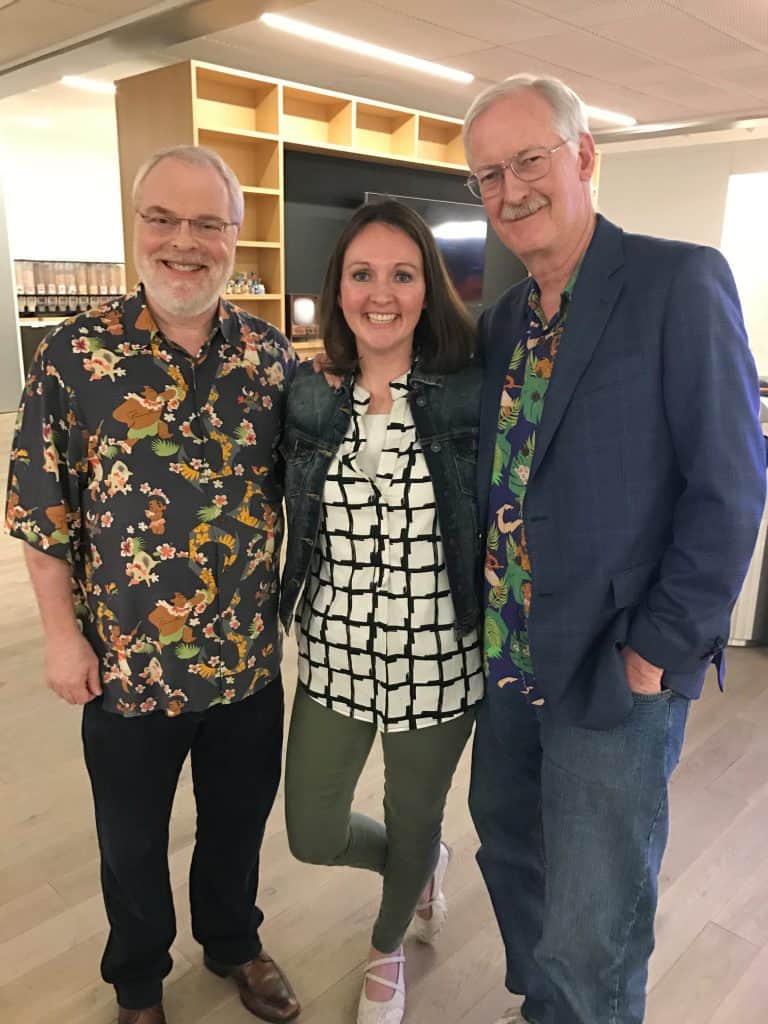 I loved being able to hear all of the different aspects of the making of the films. It is truly amazing how much study, time and passion goes in to every single roll in the making of a movie. I loved learning about their respect of the Pacific Islanders in bringing their story to life. After the interview session, the Directions were so kind and took a moment to meet with each one of us and ask us questions about where we are from and who we are. They also had the coolest Moana shirts on! I am so grateful for the chance to learn from such talented people 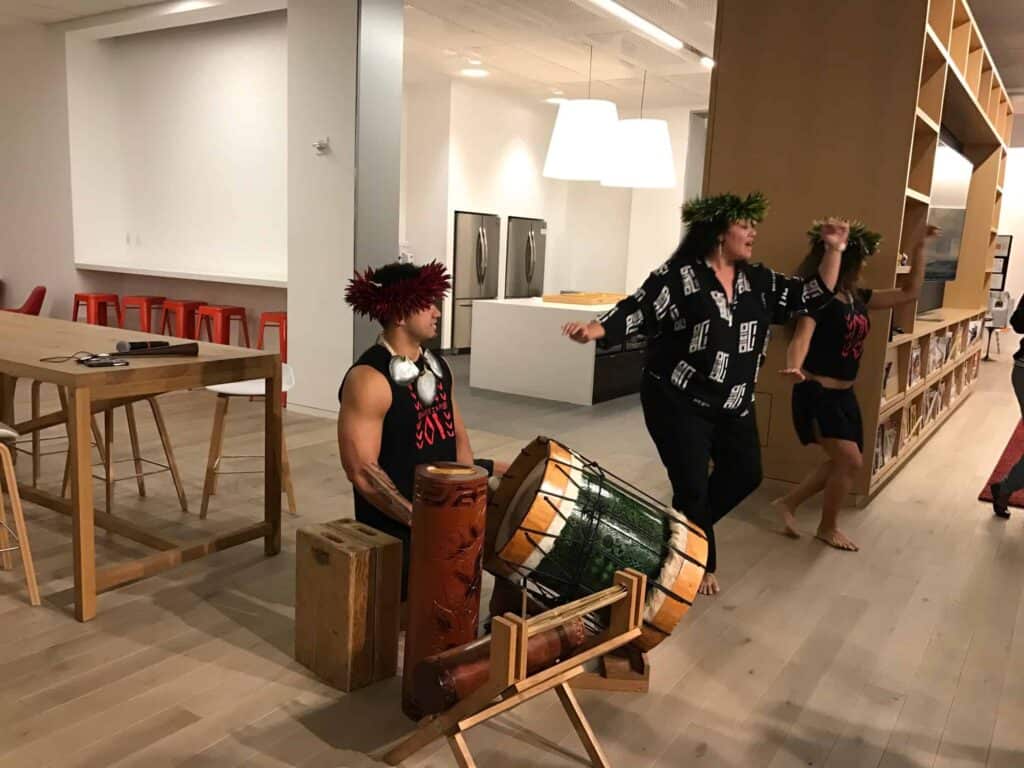 After our questions and answer session, we had the opportunity to learn about the music and dance in Moana. They were very talented and showed us some moves that you could find in Moana. My favorite character was Moana's grandma, so I loved being able to see the dance from the movie and learn more about what the moves mean. They are more than just movements, they tell a story.