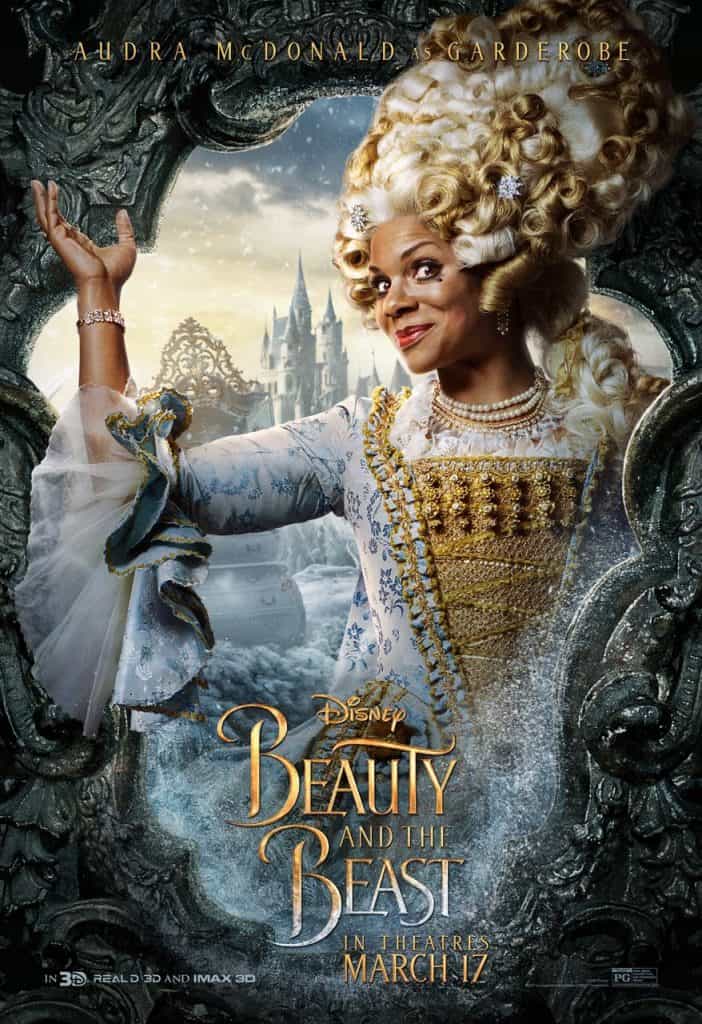 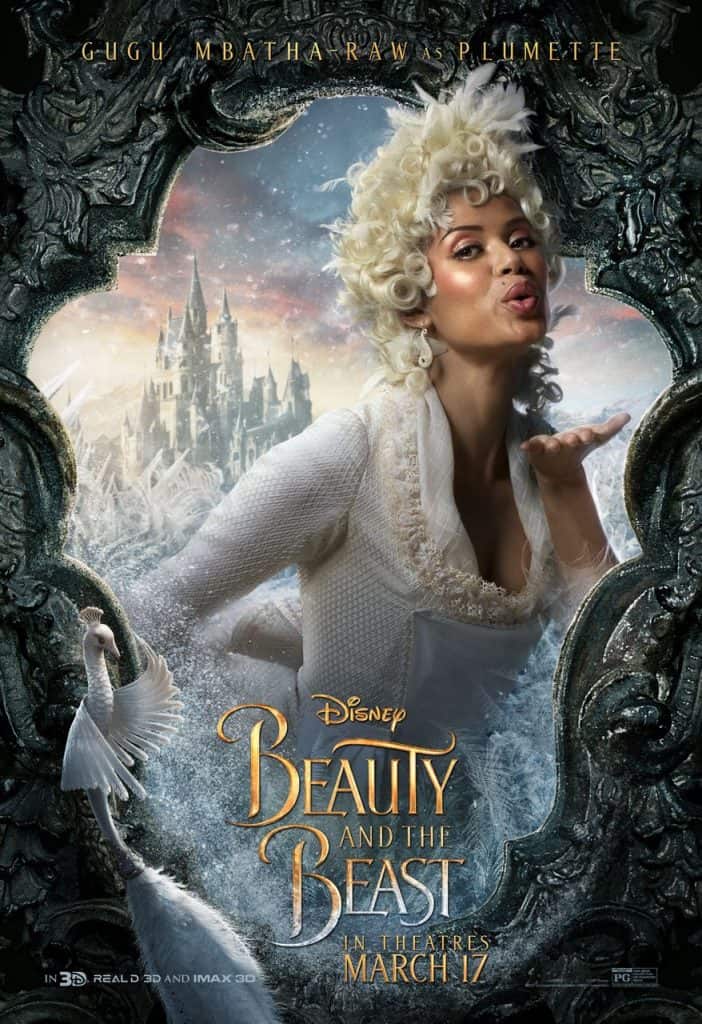 Oh my goodness, you are going to love Audra McDonald and Gugu Mbatha-Raw in Beauty and the Beast. I’ve said it again and again but they did an AMAZING job at casting for this movie. Both of this ladies play such strong roles in the movie and do such a great job. Audra McDonald plays the role of “Garderobe” and Gugu Mbatha-Raw plays“Plumette”. I love how in this live action remake of Beauty and the Beast the emotional story behind these two characters is really explored more and you feel more for what they are feeling not being human. They were so much fun to interview and just like Dan Stevens, Emma Watson, Josh Gad, and Luke Evans they are proud of the movie they made and are passionate about the message. 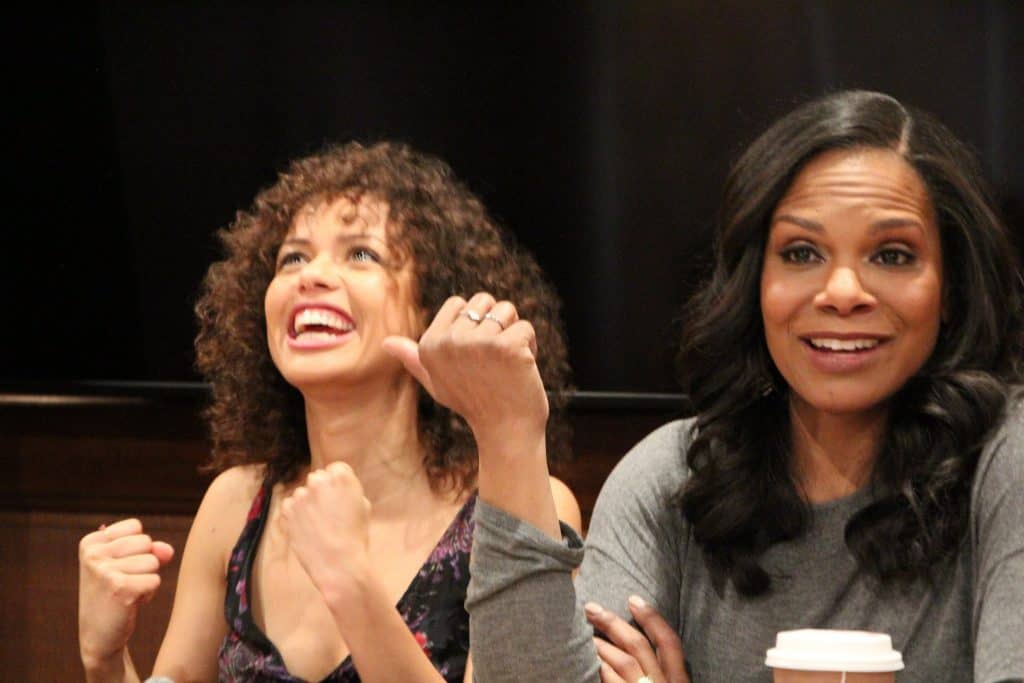 Isn’t this a great picture? I love it so much because it really shows how fun our interview was and how open Audra McDonald and Gugu Mbatha-Raw were with sharing their story. I love being a mom and talking to moms because it opens the doors to a more real and candid conversation where they feel comfortable enough to share their experiences. 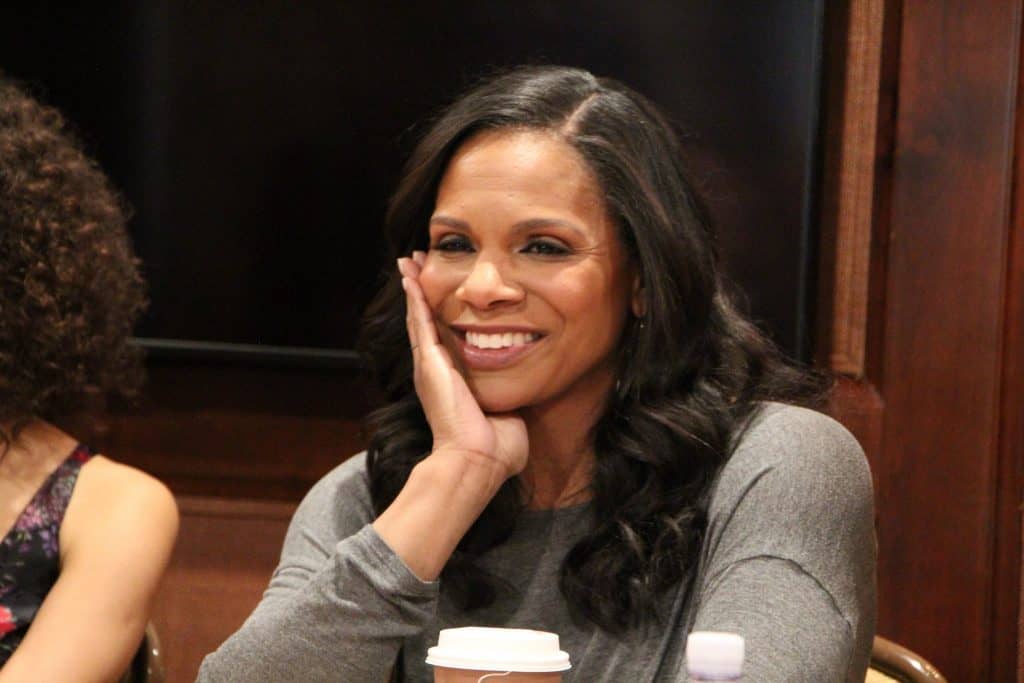 What made it so you wanted to be a part of a Disney movie?

Audra McDonald: If Disney calls– I would sell Churros at the park for them! Its Disney! You want to be a part of it!

Every time you sang it lit up the scene. What was your path in becoming what you are today?

Audra McDonald: A lot of it had to do with my parents and my mom. I had my parents to thank for looking for something that was right for me and helping me find my path.

Talk to us about diversity in this film and what you are bringing into it.

Audra McDonald:We got told yesterday that we are the first and second inter-racial kisses in a live action Disney film and we were like, “we are?” We didn’t even think about it. Hopefully we get to a day where no one has to think about it. I am pleased that Disney recognizes that you have to represent the entire world out there.

Talk to us about your family. You just had a new baby.

Audra McDonald: It thrills me that my 16 year old daughter is excited about the movie because Emma is such an incredible role model. If that is your role model, then go-go-go! To be apart of this film with people that have influenced my kids so much is very important to me. My four month old did see the film. I don’t know what she thought about it. 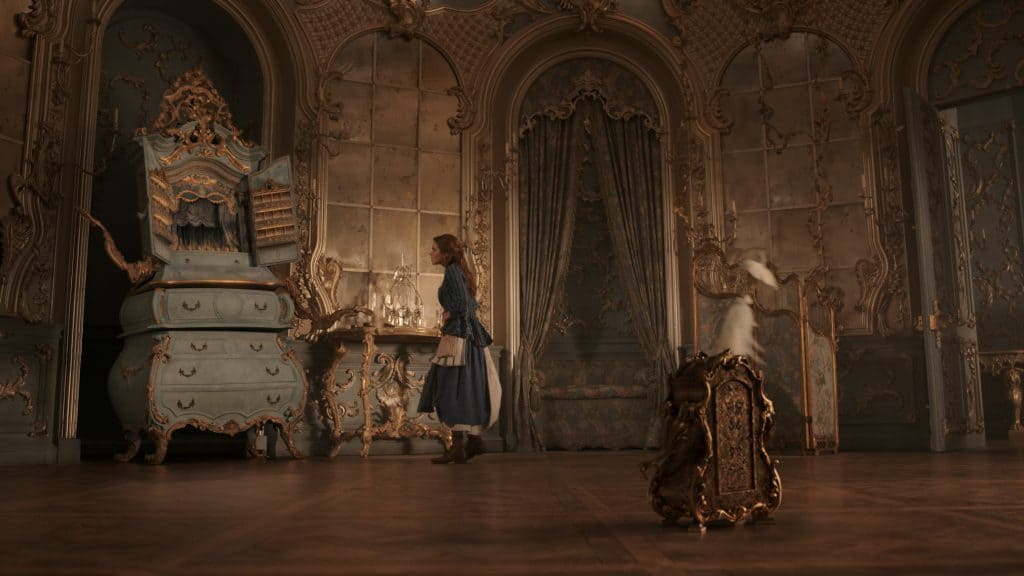 How is it different preparing for your parent in the animation parts compared to the live action?

Audra McDonald: Bill Condon is such an incredible leader and you feel very safe with him. He is in there playing with you. It really is just make believe. For the wardrobe, it was told to grunt a little, snore, snore again, now sing a high note. We had the time and freedom to explore and they take that and the CGI folks bring back something that we can put on top of it. It is a real collaborative effort. It takes a village.

Can you talk about your costumes? They are amazing!

Audra McDonald: The first time I sat in the chair– the dress being so large, I couldn’t walk in to any door. I had to walk sideways. The top of wardrobe is her wig. The amount of attention Disney puts into the details is amazing. You can’t even see them, but the shoes that I wore were the feet of the wardrobe. So if you saw my shoes, they curled up in the same way as the feet of the wardrobe. Even the design of our makeup is echoed in the objects.

What are you hoping audiences take away from seeing this film?

Audra McDonald: Love conquers all. Love wins. Its not just about giving love but loving yourself, too. Realizing that what you have on the inside is most important and what you have on the outside doesn’t matter. I’m sure thats what people are going to take away from this.

What was it like to see the whole movie coming together?

Audra McDonald: It was overwhelming. I was so shocked by how moved I was. I felt like I was watching it as an innocent audience member. I felt completely moved from seeing myself up there. I was weeping at the end. You get swept up. 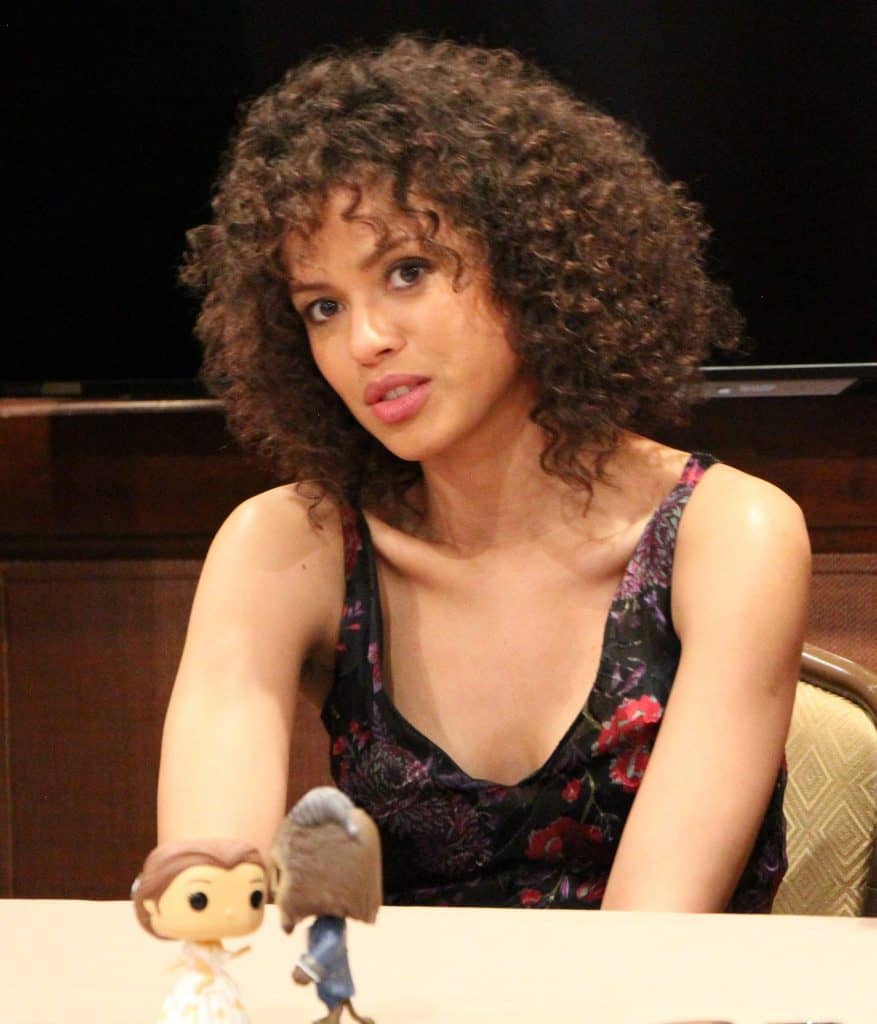 What made it so you wanted to be a part of a Disney movie?

Gugu Mbatha-Raw: I was obsessed with the original movie. It came out when I was 8 years old. I had a cassette that I made my mom play in the car on the way to ballet. Everyday. I knew all the words for the songs. It is still my favorite Disney movie so I had a very personal connection to it. When my agent called asking if I wanted to be a part of it, I squealed on the phone so loudly. I think it was probably the biggest reaction to getting a job that I ever had. I knew that little 8 year old inside of me was so excited.

Talk to us about diversity in this film and what you are bringing into it.

Gugu Mbatha-Raw: I guess we are just bringing ourselves. Bill the director had the vision to make it such a diverse cast. It wasn’t really something we discussed which was kind of cool. It just sort of is. We are thrilled about it.

How is it different preparing for your parent in the animation parts compared to the live action?

Gugu Mbatha-Raw: For me it was so liberating. I’d never been offered a role like this before. It is a lot of vocal work in the recording studio in finding the character and also just going back to the childhood thing of lets pretend. You are not limited by your face or body. You have so much more freedom. 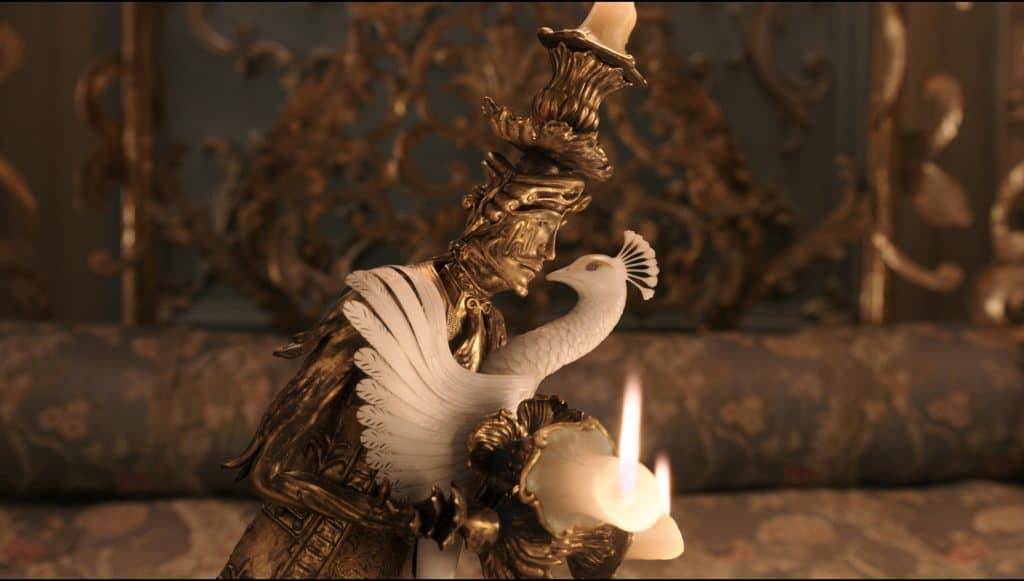 Can you talk about your costumes? They are amazing!

Gugu Mbatha-Raw: On my first costume fitting they said, “would you like to meet your object?” I was kind of taken aback because Plumette in this film is quite different then the feather duster in the original and I was pleasantly surprised that they made her into a sort of flying dove like peacock. Very dainty creation.

What are you hoping audiences take away from seeing this film?

Gugu Mbatha-Raw: I hope that people will get swept up in the romance. The music is so iconic. I love the message that beauty is found within. The idea to look a little deeper in each person.

What was it like to see the whole movie coming together?

Gugu Mbatha-Raw: It was breathtaking! See it with the audience! People are applading after musical numbers! At a screen! It brought make memories of the music. There are a couple of new songs. 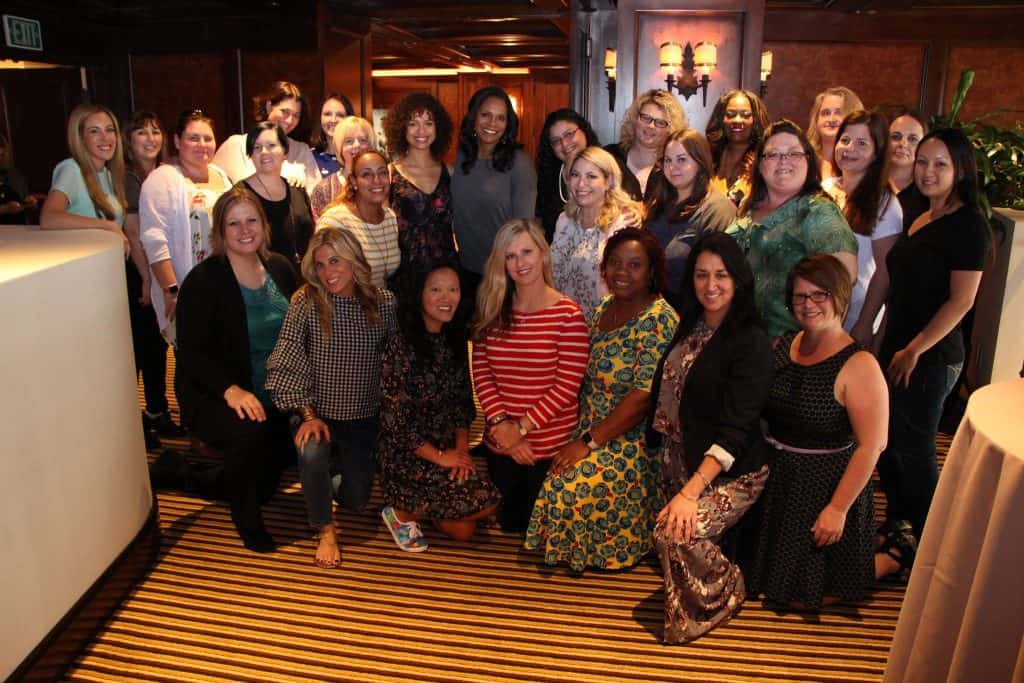 This interview was so much fun and you could really tell of their love of Disney and the movie. You are going to love their characters in the live action Beauty and the Beast and discover more about their own personal love stories. Disney’s Beauty in the Beast is in theaters March 17, 2017.

Previous Post: « Disney Beauty and the Beast Fearless Printable
Next Post: THE KETOGENIC DIET AND EVERYTHING YOU NEED TO KNOW ABOUT IT »